Connecting with Kaylee Mulgrew of Next Level NOLA

Tania is a motivated young woman who wants to be a nurse someday. She graduated from a Collegiate Academies high school last spring and enrolled in an innovative program called Next Level NOLA (NLN) last fall. Through the program, she has worked toward her goal of becoming a nurse.

NLN is a one-year program for New Orleans Public School students who have finished high school and want a “bridge” to college or a strong career. Some may need some additional time, academic support, or financial opportunities before they take their next steps. In the program, students, called “fellows,” receive coaching from NLN team members as they take classes (at no cost to them) toward associate degrees online at Southern New Hampshire University (SNHU) or earn industry-based-credentials for high-wage, high demand careers. They also prepare and plan for their next steps, like a four-year college or well-paying career that meets their skills and interests. 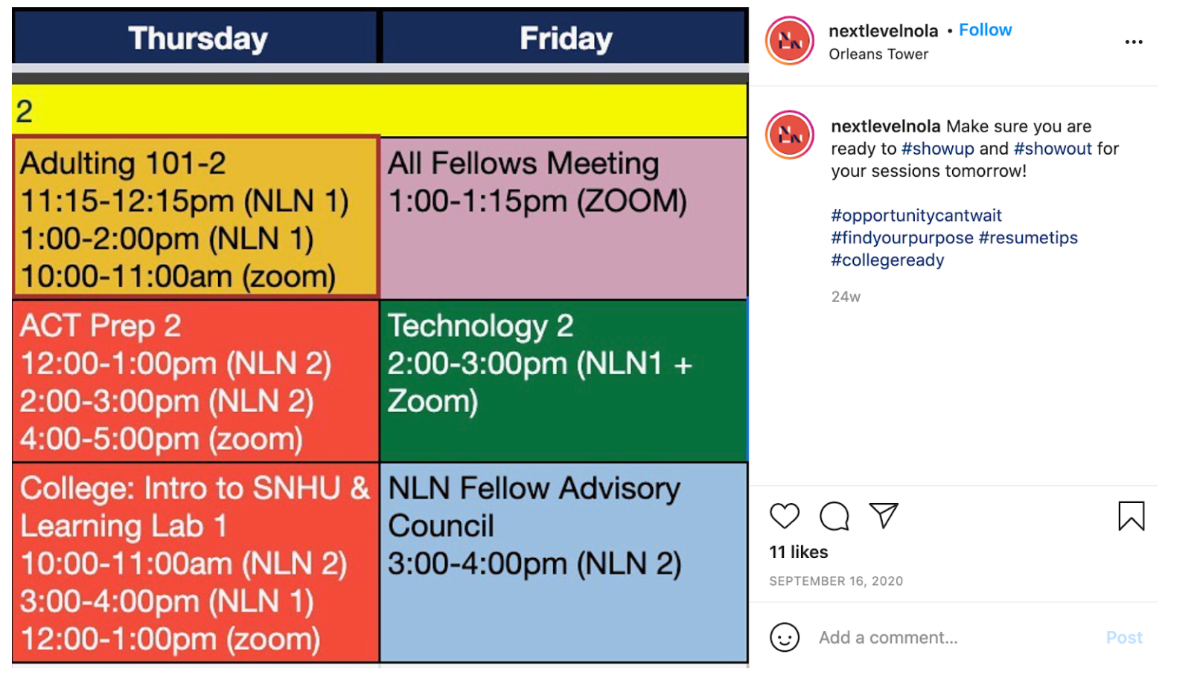 Next Level NOLA published their schedule on their Instagram this fall.

Tania’s “success coach” and ACT preparation teacher is Kaylee Mulgrew. Tania and Mulgrew knew that the ACT was critical to Tania’s plans to go to nursing school. When Tania first took the test, she scored a 15 on the math section, which would have required her to take remedial classes in nursing school. This would mean slower progress toward graduation and spending more money on credits. 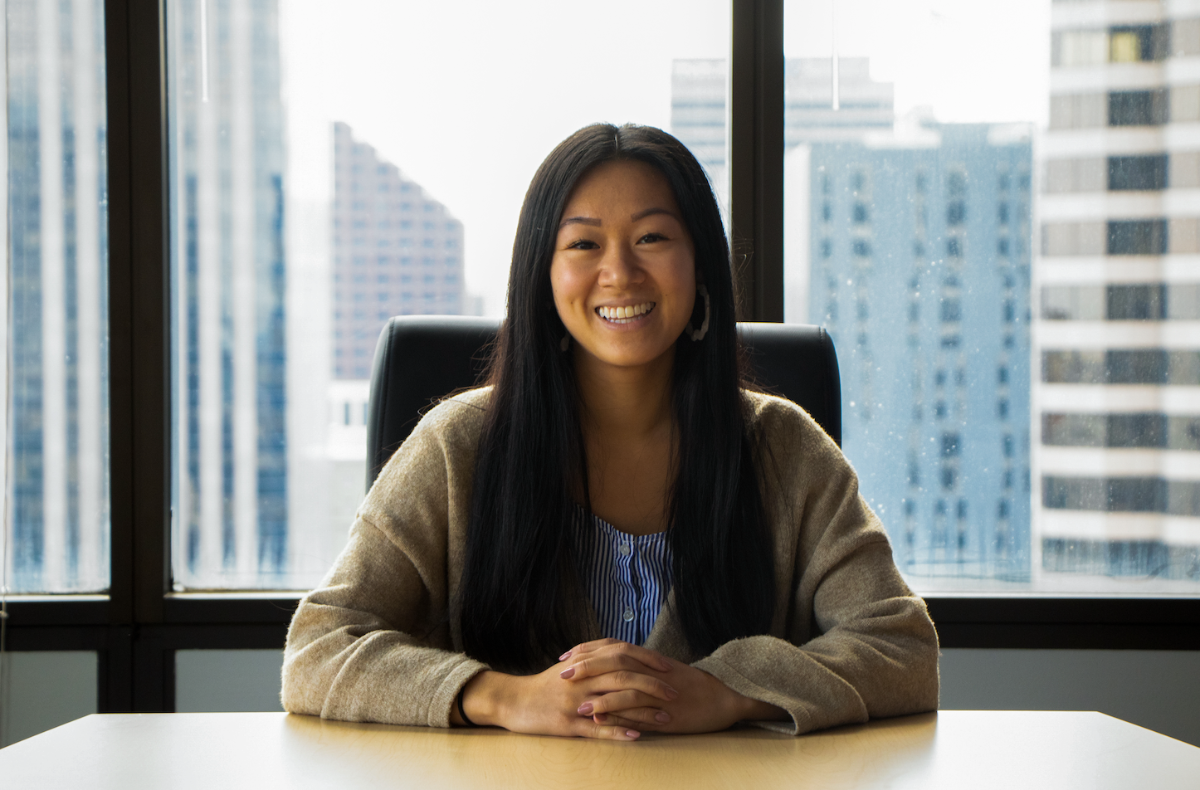 Mulgrew was determined to help Tania and her classmates raise their scores. She is an innovative teacher, adapting her class structure based on how students are learning best. She taught in small-group sessions in the fall, but when she noticed students were making the most progress in one-on-one moments, she switched to individual tutoring for the second semester. Tania showed up to all of her sessions, even while working a full-time job in the food industry and taking SNHU classes.

“She had a lot on her plate…she really just pushes herself to do things that I definitely did not do as an 18 or 19 year old,” explains Mulgrew. “Waking up early, getting herself to work every day, saving money that she can go to college and pay her bills, and still finding time to socialize with her family and friends.” 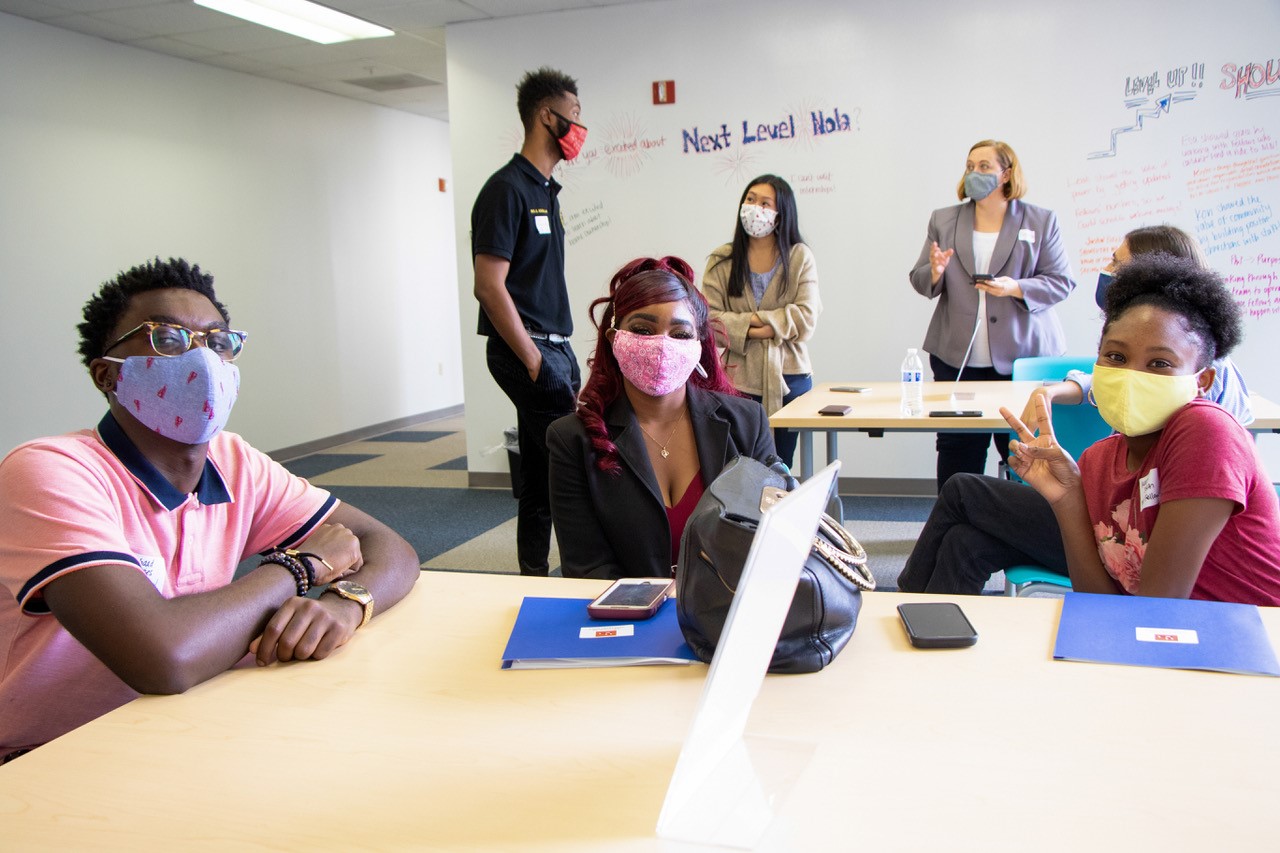 And when the ACT came around a second time, Tania grew seven points, an enormous leap. Now, she will not need to take remedial math classes when she gets to college. She is looking at programs at Louisiana State University, Delgado Community College, Dillard University, the University of New Orleans, and Nicholls State University.

Like Mulgrew’s process in teaching the ACT, NLN was a direct response to students’ needs. Its founder, Rhonda Dale, was the principal of Abramson Sci Academy in New Orleans East for many years. She and her founding team were concerned about students who graduated from high school, but did not make it to or through college afterwards, or into the job they would have wanted. They tried to find what could have helped. Often, this was financial assistance — young people simply didn’t have the funds they needed. Some students needed to bring up their ACT score, like Tania, to avoid costly remedial courses or to earn the 20 required on the test to get state scholarship funding. Sometimes, students needed help with technical skills, like using Google Drive or calendaring out a schedule. Other times, there were personal, health, or academic roadblocks in their path. This year, the pandemic added unforeseen barriers for many students, and NLN was a chance to get their plans and finances in order.

So NLN’s team innovated: they built a program that directly addressed these issues. In addition to ACT prep and the connection to college courses, they offer classes like “Adulting 101,” in which fellows learn about financial planning, interview skills, and civic engagement. By providing a pathway to a free associate degree, NLN can also cut two years worth of cost off of college. This expands access for students who might not have been able to attend before, or who may have had to leave before graduating. Fellows also get personal coaching on their career and educational goals; whereas high school college counselors sometimes have upwards of a hundred students to support, coaches like Mulgrew work with about ten fellows each. 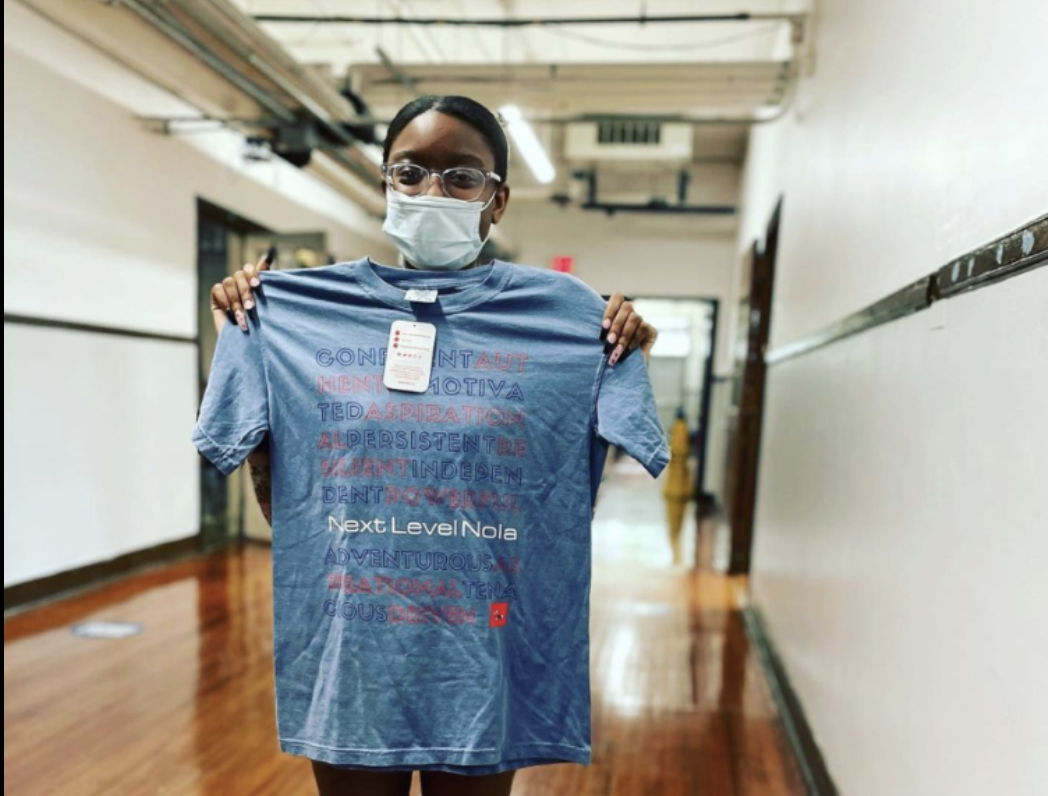 Because NLN launched at the height of the pandemic, they followed the safety protocol and in-person learning standards of NOLA-PS. They have provided fellows with laptops and hotspots to connect online for video meetings and lessons (SNHU’s classes would be online regardless). And when NOLA-PS’s schools have been back in person on a “hybrid” schedule, they have met in small groups, distanced and wearing masks.

NLN’s physical site is located in the Central Business District, on Poydras Street. NLN wants fellows to be comfortable there, with clean, open workspaces and plenty of snacks. While its location on Poydras lends it a professional atmosphere, NLN also tries to create an environment that mimics a college campus. 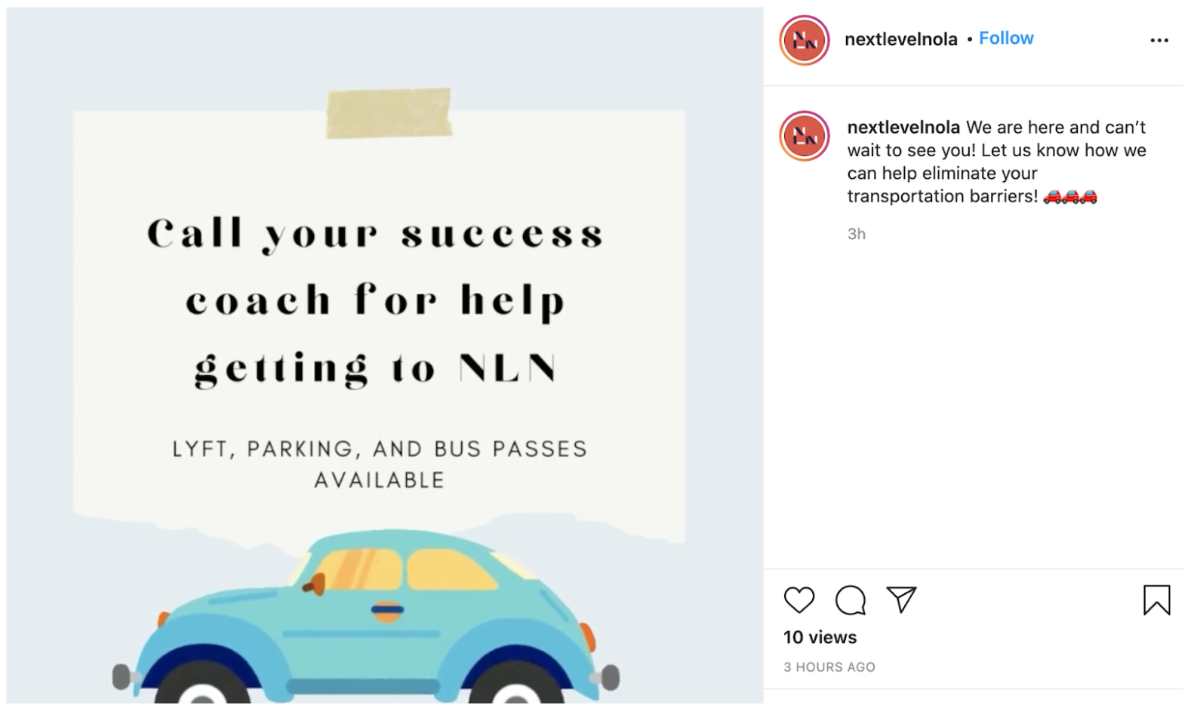 NLN works to eliminate barriers to access for fellows.

So when COVID-19 rates allowed it this fall and winter, NLN held distanced, in-person “hot cocoa and cram” for fellows once a week. Everyone wore masks and when they ate or drank, they were at separate tables. Even with the safety precautions, it felt warm and connected.

“We had hot chocolate and snacks…it created a very collegiate feel of a community and people could come to the space to get work done but they could also socialize…they felt they could ask questions and get help from staff members or other fellows.”

This idea was both simple and innovative. It meant that fellows like Tania could enjoy the company of their peers, while making progress on their schoolwork and practicing the type of setting they’d find themselves in later on. 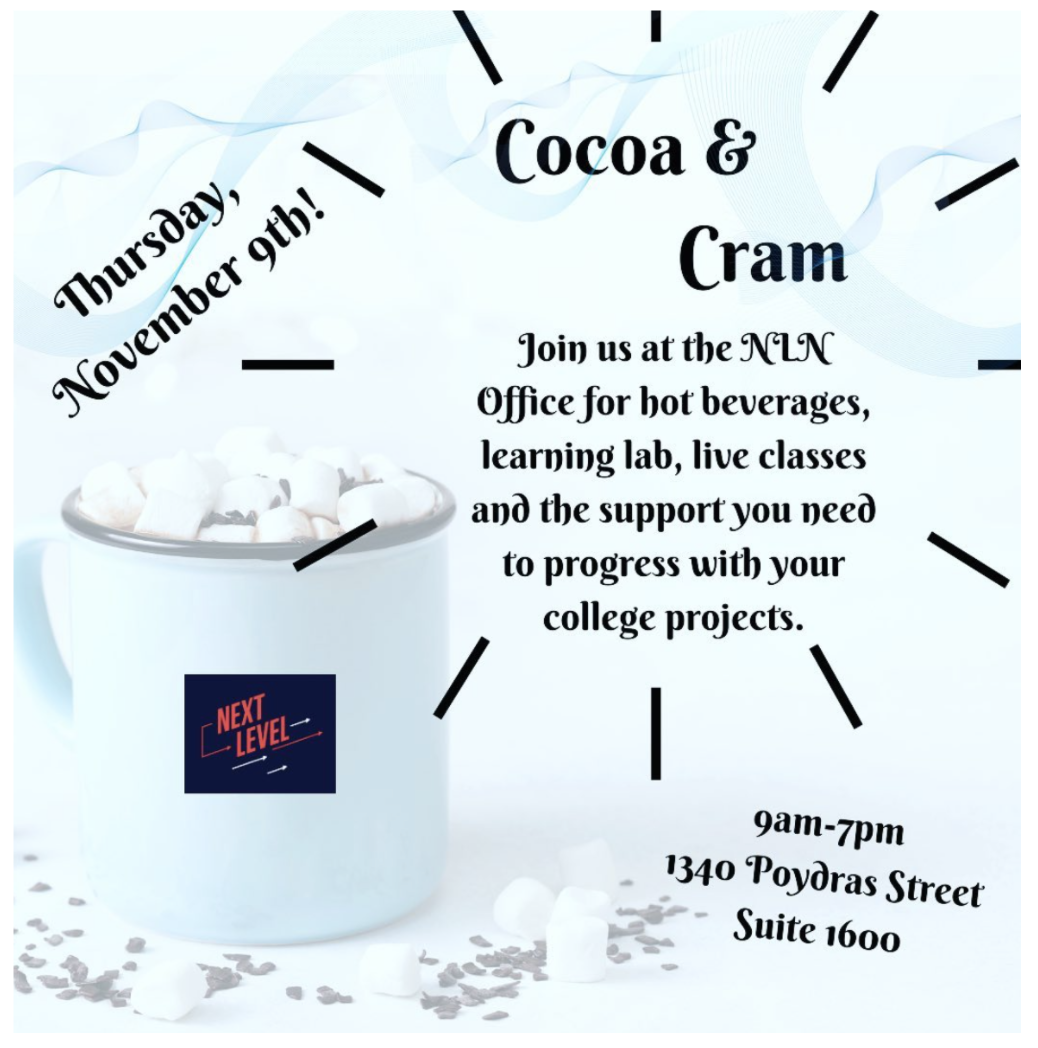 It would bring fellows closer to that day when they took it to their own “next level,” be that through college or a well-paying job. Mulgrew thinks about this in terms of each individual student’s path, but also on a broader, citywide and national level.

“There’s a larger systemic issue in education that needs to be solved regarding higher education and affordability and access…these systems need to be solved to grant equal access and equal opportunity, which America claims is what education is about.”

For her, NLN offers one route to opening up that access and expanding opportunity.

“Working in this space,” she says, “makes me hopeful that change can happen.”

For Tania, now closer than ever to nursing school, it has already begun.

*Tania is a pseudonym