NOLA Stands Out: How Our Schools Responded To COVID-19

COVID-19 Closed Buildings,
Not Schools: How Our Educators Took Charge

In New Orleans, we are facing the deep crisis of high rates of COVID-19 infection and death—our students, educators, and community feel grief, pain, and fear. Amidst it all, our school teams have never stopped fighting for their students. When schools closed, they had no roadmap for how to proceed. There were no best practices for teaching in a pandemic. But New Orleans educators rose to the challenge, approaching their work with great urgency and care. They did not waste a moment in responding. They launched a coordinated effort to meet students’ basic needs and, school by school, network by network, they made sure their students’ education would not stop just because buildings closed. Their efforts stand out, both statewide and nationwide. One recent survey found that New Orleans outpaced Louisiana as well as a sample of districts nationally in the percentage of our schools contacting students, providing feedback on their work, teaching new content, and covering both core subjects and electives. This means more of our students are able to continue learning and staying connected with their school communities.

Schools put their students’ basic needs first. They knew most children relied on school breakfast and lunch, and some were facing significant food insecurity. 83% of New Orleans public school students come from economically disadvantaged households. When the state announced on Friday, March 13, that schools would shut their doors come Monday, March 16, schools sprung into action to plan over the weekend. So when Monday came and schools officially closed, many of their outdoor “lunchrooms” opened, providing grab-and-go meals at a safe social distance.

At first, this was seven schools giving out bagged breakfasts and lunches to any student under 18 years old. By Wednesday, charter networks and schools had collaborated with NOLA Public Schools (NOLA-PS) to orchestrate a powerful effort to distribute meals at sites throughout the city. The force of 7 schools on Monday had grown to 44 by Wednesday. Meal eligibility also expanded to include 18- to 22-year-olds enrolled in public school. Meanwhile, many schools considered students’ mental health needs as well, from launching a mental health hotline, to hosting webinars for families about helping children cope, to providing virtual recess and celebrations, and more. 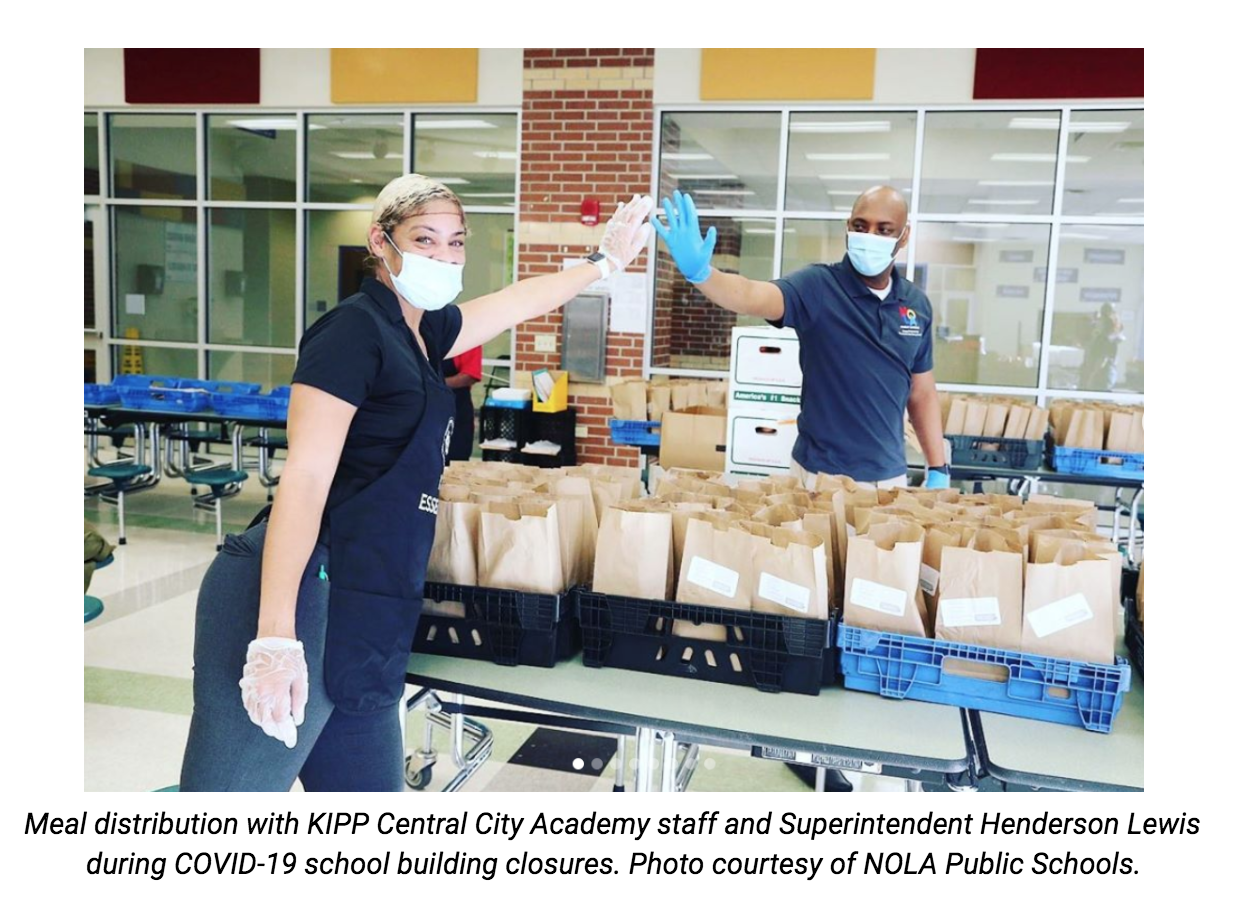 When it came to meeting students’ academic needs, schools were strategic, creative, and focused. Some sent children home with a week’s worth of paper-based work the day closures were announced. In the days that followed, schools continued to develop and launch plans—some with physical materials that were delivered through bus routes, meal sites, or mail, and others with a mix of digital and physical lessons.

Schools and NOLA-PS alike knew that while virtual learning held great potential, not all children had access to the technology they would need to connect. Among New Orleans families making under $20,000 annually, 55% lack home internet access. Charter networks and schools led the way in determining what their students needed. The district also launched into action the same day statewide closures were announced. The Orleans Parish School Board (OPSB) approved the allocation of funds for the purchase of thousands of Wi-Fi hotspots and Chromebooks. They managed the full process of procurement and safeguarding of technology in three weeks. Then, they distributed both hotspots and Chromebooks to schools, who delivered them to the students that needed them. This allowed more young people to access the strong resources schools were providing, such as video lessons and classroom “hangouts.” The work to ensure access to all of our young people will continue this summer in preparation for next school year.

By March 23, the beginning of the second week of school building closures, at least 97% of New Orleans public schools had begun providing their students with some form of physical and/or digital educational resources to continue learning. By the middle of this week, the resources from at least 85% of schools were specific to a student’s grade and subject; in some cases, they were even further individualized by classroom and student. These specific resources ranged from guided paper packets with instructions for which assignments to complete, to teachers posting daily assignments for each of their classes through Google Classroom, to online platforms such as i-Ready, which assesses students’ mastery of skills and provides instruction specific to their needs. The majority of schools used a combination of multiple types of resources.Many other school districts across the country that had closed their buildings were also providing educational resources at this time. However, only some were providing specific learning materials like those described above. The Center on Reinventing Public Education (CRPE) launched an effort in March to track districts’ responses to the pandemic, and the database they created includes 75 U.S. districts that closed around the same time as New Orleans. While 93% of those districts were providing educational resources as of March 27, only 49% were providing specific resources to students. CRPE describes such resources as “curated/directive curriculum [that places] each student in a specific position in a resource and prescribes their pacing through that resource.” The remaining districts were providing general resources only, such as a list of suggested educational websites or educational programming on a local PBS station. The much higher percentage of New Orleans schools providing specific resources—at least 85%—demonstrates the incredible dedication of our teachers, school leaders, and network leaders to ensuring students’ learning continues, as well as their creativity and innovation in finding solutions to the significant challenges presented by the pandemic and the digital divide. 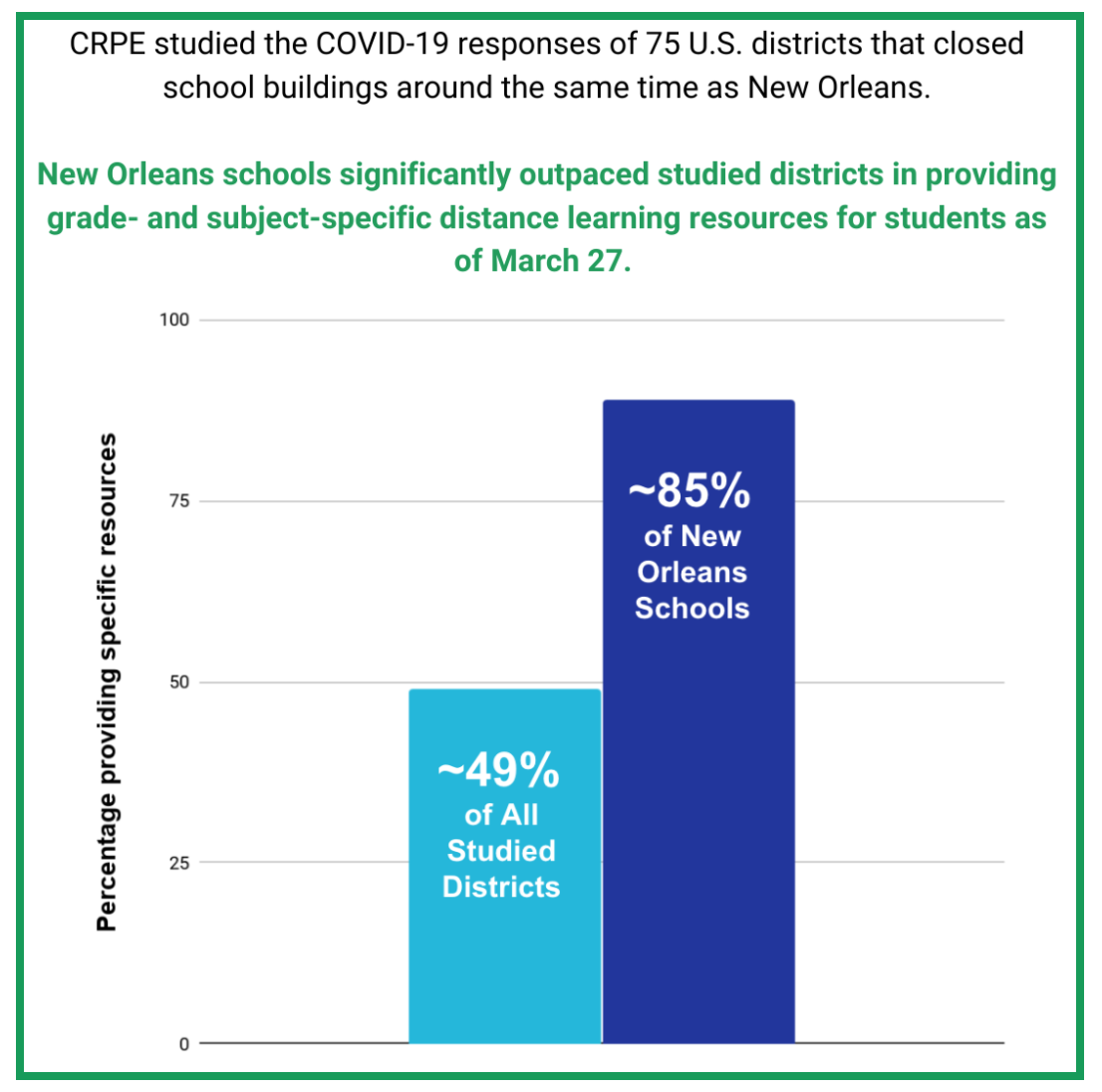 By a month into school building closures, many New Orleans public schools had expanded and refined their approaches; some had begun with physical resources only and transitioned to online learning as the primary focus in late March or early April. Responses to a Louisiana Department of Education (LDOE) survey in mid-April show that teachers at 100% of New Orleans schools were reaching out to their students across all grade levels at least weekly. Teachers at approximately 90% of New Orleans schools were providing students in all grades with feedback on their work. Roughly 80% of schools were delivering at least some instruction of new content across all grade levels, as opposed to solely providing assignments in which students review and practice material taught previously. Finally, the learning materials at approximately 85% of New Orleans schools were covering at least the four core subjects of English Language Arts (ELA), math, science, and social studies across all grade levels, with two thirds of schools covering electives in all grades as well.

At this point in the closures, New Orleans schools were continuing to lead the state and many districts nationwide in terms of planning and adoption, as demonstrated in the table below. 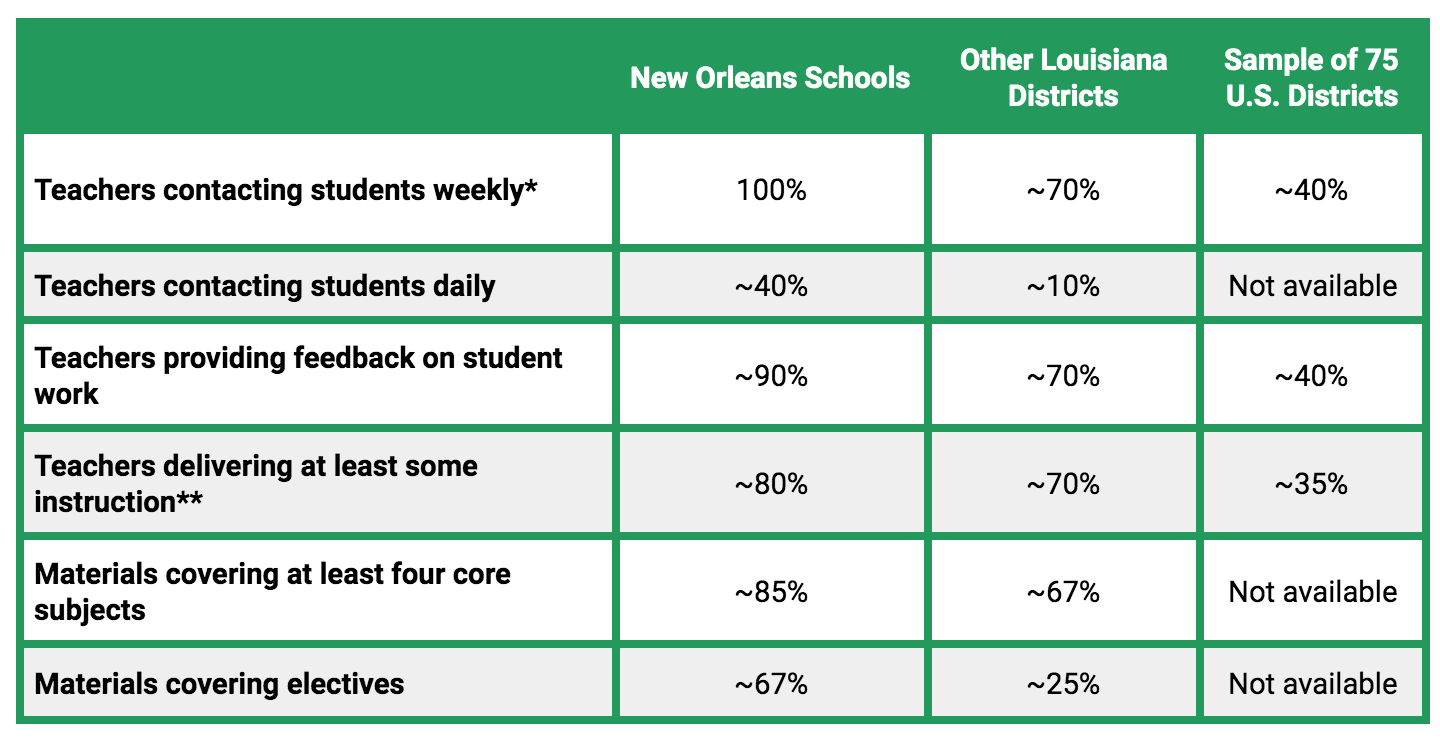 Since mid-April, New Orleans public schools have continued to work incredibly hard to adapt to our new reality and ensure learning continues. Last Friday, May 15, marked the end of the 2019-20 school year for the vast majority of New Orleans schools, with the remaining schools finishing by the end of May. Network and school leaders, along with NOLA-PS staff, have already been planning for summer school and the 2020-21 school year for a number of weeks.

As we move forward, we can expect that decisions and guidance will be founded, first and foremost, in the work of the Resilient Louisiana Commission and its Education and Workforce Development Task Force. Any guidance concerning the operation of K-12 schools and serving students will be considered by the Task Force and its K-12 education subgroup, of which NSNO’s CEO, Patrick Dobard, is a member. The Louisiana Department of Education (LDOE) and the Louisiana Department of Health’s Office of Public Health (OPH) will then work together to further develop and elaborate on the guidance and disseminate the information to school system leaders. Next, NOLA-PS administrators will review the guidance and take into consideration any additional guidelines from the City of New Orleans. Finally, NOLA-PS will communicate with New Orleans network and school leaders to both help them understand the state and local guidance and collaborate with them to determine how to implement the guidance in our schools. 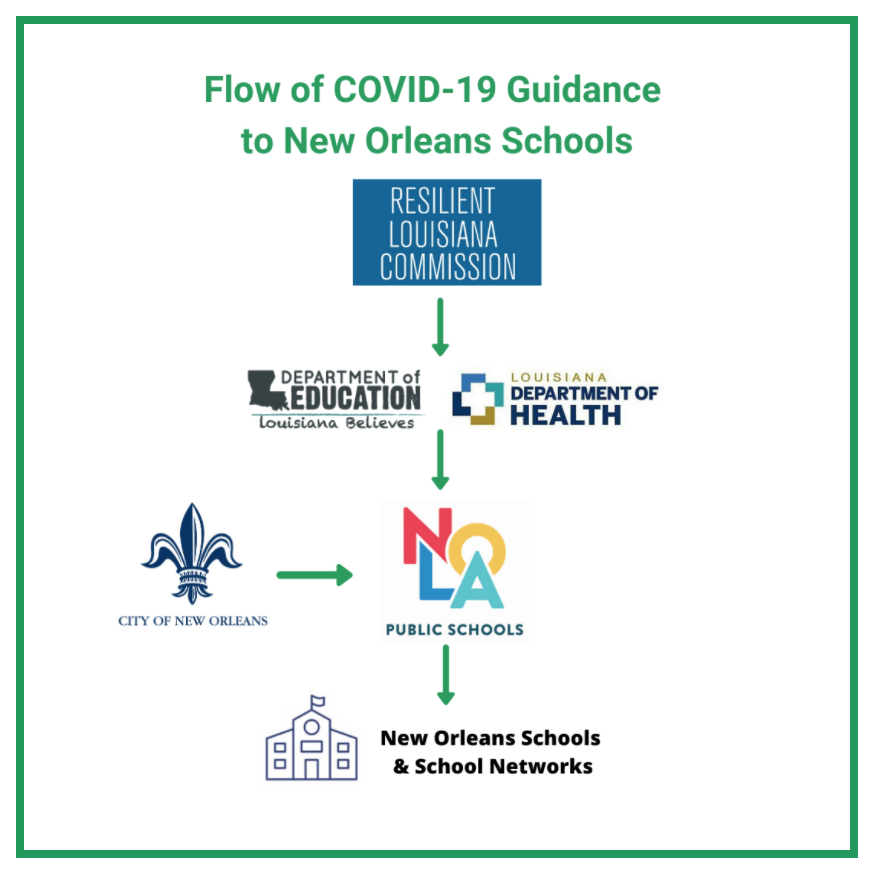 The first example of this process being implemented concerns summer school, which over half of New Orleans public schools are planning to offer, according to the mid-April LDOE survey responses. First, the Resilient Louisiana Commission released the Roadmap to a Resilient Louisiana on May 11, with a focus on Phase One beginning May 15. The Education and Workforce Development Task Force and K-12 subgroup had been working on guidance for K-12 summer programs during Phase One, and passed this guidance on to LDOE and OPH. On May 13, LDOE and OPH released guidelines concerning the safe on-site operation of K-12 summer schools, summer camps, etc. These guidelines outline both required protective measures and non-binding guidance; required measures include cloth masks, hand washing at least every two hours, maintaining small static groups of 10 or less, and more.

NOLA-PS took into account the City’s guidelines for Phase One and communicated with network and school leaders. On May 14, NOLA-PS announced that although the state is allowing on-site programs in Phase One, given the specific context in New Orleans, all NOLA-PS summer school programs will be conducted through distance learning. Nonetheless, the state guidelines give us an idea of what the 2020-21 school year may look like.

Importantly, the citywide meal distribution program—which is currently providing approximately 125,000 meals per week to children in need—will continue throughout June and July. Ninety percent of current meal distribution sites have agreed to remain open during the summer, and NOLA-PS is working to confirm additional sites to replace those not remaining open. A full list of summer sites is expected to be released this week.

We are proud of our city and our community, and we know that our schools are prepared to take on whatever may come next. They will remain deeply focused on making sure our children are healthy, safe, and learning. Our charter networks and schools have done so much to make sure this is the case, and they will not stop now. They will continue to listen and innovate. They will continue to be flexible and meet the ever-changing circumstances we are in. They will continue to collaborate with one another and with families. They have shown themselves, time and time again, to be experts at adapting and striving for excellence for all children. Their efforts were not born out of strategy sessions in far-away board rooms or based upon white papers that did not apply to our unique environment. Our schools listened. They were thoughtful, they communicated, and they took action. They did what we do well in New Orleans—they worked hard, together, and with so much heart.

We are grateful to the Center on Reinventing Public Education for their research into districts’ COVID-19 responses and for sharing historical versions of their database with us, which enabled the analysis found above.