Learning through Play at the Louisiana Children’s Museum

This fall and winter, with the outside world so stressful, some of our city’s youngest students were in City Park, holding magnifying glasses up to the spiky centers of flowers. They were cradling dolls in a play house, playing with blocks half the size of their bodies, and writing with colorful markers on clear walls.

Langston Hughes Academy’s preschoolers and kindergarteners were learning at the Louisiana Children’s Museum. This was the fruit of both generosity and innovation. When COVID-19 meant that the Children’s Museum could not open at full capacity, their team did not want the joyful space to go to waste. With the support of the Helis Foundation, they offered use of the museum to the team at Firstline’s Langston Hughes Academy.

When students could attend school in-person this fall, Langston Hughes preschoolers and kindergarteners learned from the museum. This has been exciting for children, families, and educators. For Langston Hughes’ staff, it has called for innovation, as they work to make the most of a new space, all while teaching COVID-19 safety protocols to four, five, and six-year olds. 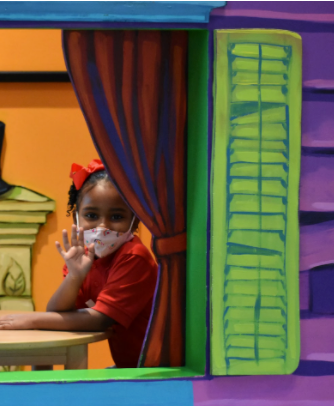 When kindergarteners would normally have structured play, they now play amidst the structures of the museum. And throughout it all, children are wearing masks, elbow-bumping instead of giving hugs, washing their hands, and having materials sanitized regularly.

“It is a testament to our teachers and the amount of work they put in to make this happen for kids,” explains Hunyadi.

“Before this, our teachers had a much more traditional model of how children would learn in a classroom. It was joyful and playful but it wasn’t play-centered. I give a huge credit to them for figuring out how to do something that is not what they did in the past.”

The school offered some initial professional development and the teachers have ongoing touchpoints with museum staff. But often, educators’ innovations came through trial and error.

“Frankly, it was a lot of trying it out. Saying ‘the kids really enjoyed this,’ or ‘this really worked,’ and sharing that with each other.”

Hunyadi recalls a moment from the fall when she was clear her team had hit its stride. It was just before Thanksgiving break and she was observing the Pre-K classes.

“The museum has a really great exhibit called ‘follow that food,’ that’s a dramatic play experience turned up to volume 10. It goes all the way from understanding how to pick the food from the ground, to Mr. Okra, who sells it, to the kitchen where we prepare the food. The kids were interacting with that exhibit and the teacher was pulling kids aside to talk about family recipes. They were starting to write the letters that went with the recipe, and doing sound-matching.

The lesson closed with the class coming together and having a mini Thanksgiving dinner with their class family with the play food…and it was the most well-rounded moment. There was some instruction that happened in a way that was really organic, driven by what the kids are interested in.” 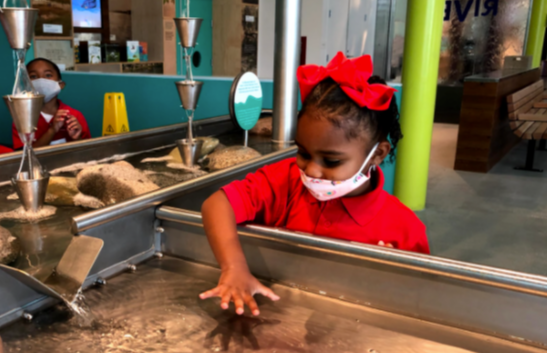 Hunyadi has seen several moments in which her teachers innovate to use the exhibit as part of the class itself. She watched children playing with the museum’s “water table,” which is designed as a model of the Mississippi River.

“A teacher had a group draw the river and tell the class what they knew. They could describe its shape, they understood that it flows into the Gulf, that it starts as a small stream up in Minnesota. The unit in the pre-k curriculum was about clothing, so they could also tell you about the fisherman wearing certain types of clothes to protect their bodies while they’re working. It was impressive the amount of four-year olds knew about the river.”

When citywide COVID-19 infection rates sent schools back to virtual instruction in January, the Langston Hughes team had to return to remote instruction, as well. If school is allowed to reopen in person again, they will have use of the museum until March. For now, though, teachers are innovating once more, taking the work they did at the museum and leveraging it, even without the museum’s resources. They are making the most of the relationships the children built with one another in person. 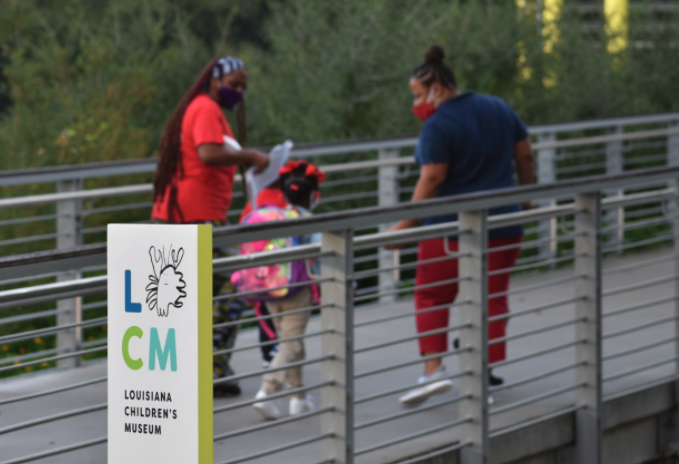 “The virtual teaching now goes better in terms of the things that are important in pre-k and kindergarten around interacting with each other. That piece goes so much better this time around because they have had the time to be together and play together.

When we were first virtual in September, it was more like the children were sitting and watching TV, they were mostly sitting and taking it in. Now, even during their breaks, they want to stay on and talk with each other.”

Hunyadi feels immense gratitude for her teachers for creating this environment, even online. She says that, throughout the experience of leading a school through COVID-19, she has been proud of her teachers and proud of her staff. She is inspired not just by their innovation, but their outlook.

“Our staff finds joy and they give that to kids. In a year that’s really hard, people are working hard to make it joyful.”